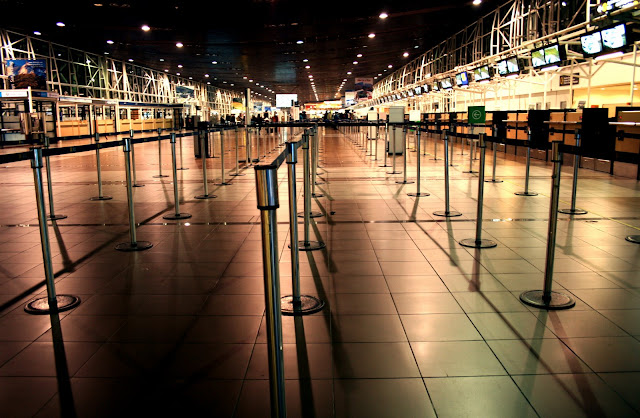 Have you ever seen the movie "The Terminal?" You know the one where Tom Hanks lives in the airport becasue he has problems leaving. Well, that could be a similar example of how we are feeling now...

Let me start with Friday. We got to the airport at 4:00 am to check in for our 6:30 flight. Now, I had gone to the LAN office the day before to see if we were allowed to bring the 46 kilos each that we came here with. She told me that absolutely there was no problem with that.
When we arrived at the airport however they told us we could only bring 20 kilos per person and we would have to pay a very large amount of money for the excess weight. We of course thought this was very unfair and didn't see why we should pay for a miscommunication within LAN. Because we said we wouldn't pay we were then taken off the flight. The problem is that no one explained to us that we would lose the tickets and have to pay an even larger sum of money to get them changed for a flight that was leaving two days later.

It was a really difficult day, we just wanted someone to help us and to tell us that we really were better off just paying the excess weight fees and getting on the plane because our other options were far more costly and would take time and waiting. If we had that information of course we wold have done that but their only concern was if we would pay or not and if not then get out of the way.

So we changed our tickets for Sunday morning and got a hotel in Santiago (where on the way Aaron got one of his bags stolen) and then last night we came to the airport and just planned on sleeping here since our flight was so early. We later found out that our 6:30 flight was changed to 7:30 which meant that we would miss our connection in Peru. They changed us to a direct flight at 3:30 this afternoon

This means us spending 18 hours in the Santiago airport and a total of 22 hours by the time we arrive in Ecuador. 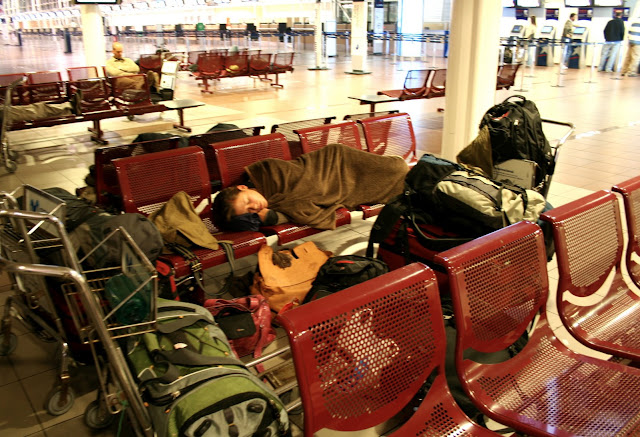 At this point I am content. I can just laugh that it seems everything has gone wrong that could go wrong in the last 48 hours. But I am learning to just shrug it off and if it can't be changed then just make the best the it right? We are here and ok and we have our flight and we will get to Ecuador eventually and tomorrow we will be seeing Aaron's parents and some other friends of ours.

As my good friend, Kelly Moreton once told me when we were in Costa Rica, "Justice is not your right." I am reminded of that especially now. No, it wasn't fair and yes, we were right in the matter but we were too busy fighting for justice with the luggage situation rather than just accepting reality, paying the fee and getting on the plane.